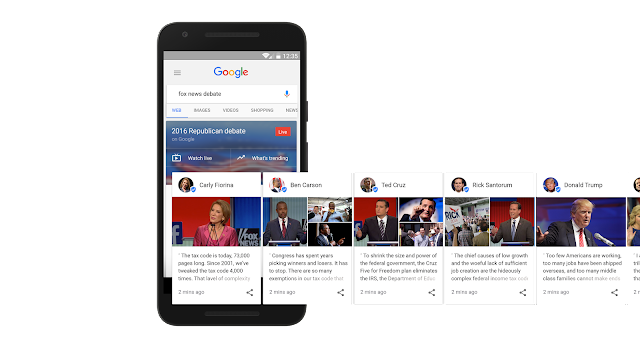 In just two days, Americans will tune in for the final Republican debate before the 2016 primary season officially kicks off in Iowa, and we’re

Dig into issues with Google Trends
Throughout the debate, we’ll also spotlight key insights from Google Trends that offer interesting insights about the candidates, issues, and debate topics—anything from questions asked about key issues to trending terms and rankings like the below minute-by-minute view of which candidate was searched most during the last debate.

You’ll also be able to answer polling questions about the issues that matter to you directly on Google Search when you search “Fox News debate.” Fox News will cover responses to these questions on air after the debate.

Watch YouTube creators engage with the candidates
Finally, three prominent YouTube creators—Nabela Noor, Mark Watson, and Dulce Candy—will join the moderators in the debate to ask the candidates a question on an issue that matters to them and their communities. Bringing new voices from YouTube to political debates is something we’ve been doing since the 2008 election, and it can lead to personal and powerful interactions between candidates and voters.

The debate begins at 7 p.m. ET on Thursday, with the prime time debate starting at 9 p.m. ET. So tune in to Fox News Channel to learn more about your presidential candidates on Google!

Know where you stand against your plan
Drive your attendance management in an automated way.

No Replies on New ways to stay informed about presidential politics