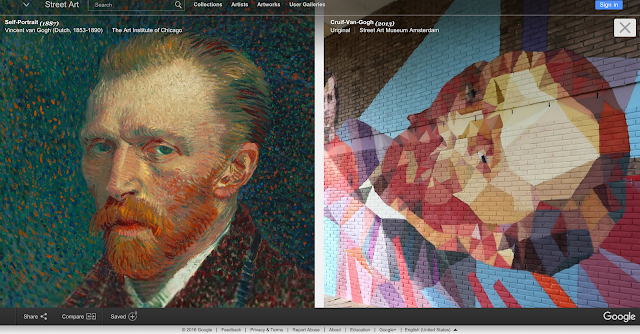 The history of art is global. Look at Van Gogh—a Dutchman who spent much of his life in France, and was inspired not only by his contemporaries but also by Japanese artists like

But with the Google Cultural Institute, it’s all just a few clicks away. Five years ago, the first 17 museums brought online a few hundred artworks so that anyone in the world could explore paintings, records and artifacts no matter where they were. Today, on our fifth birthday, the Google Cultural Institute has grown to include the collections of more than 1,000 museums and cultural institutions, with over 60 new ones added just today.

Starting today, you can descend through the famous rotunda of the Guggenheim museum in New York—a piece of art in itself—thanks to special aerial Street View imagery, or stroll the grand halls of the world’s heaviest building, the Palace of Parliament in Romania. View Monet’s famous water lilies in super-high “gigapixel” resolution and zoom in to see his layered brushstrokes—then visit Monsieur Monet’s real-life garden to see his inspiration.

From “gigapixel” images to Street View inside museums, today’s museums, galleries and theatres are turning to technology to help reach new audiences and inspire them with art and culture. And the possibilities keep expanding with the addition of newer technologies like virtual reality. Just recently we worked with the Dulwich Picture Gallery—England’s oldest public art gallery—to take the young patients of King’s College Hospital in London on a virtual field trip to the museum using Google Cardboard.

Young patients at King’s College Hospital, London, were the first to experience the Dulwich Picture Gallery in virtual reality

Virtual visits will never replace the real thing. But technology can help open up art and culture to everyone, and we think that’s a powerful thing. As you browse the Google Cultural Institute’s 6 million objects exploring humanity’s diverse heritage across 70 countries—from this prehistoric equivalent of the Swiss Army knife in the Netherlands, to the Taj Mahal in India and manga drawings in Japan—we hope you’ll agree.

Commenting is Disabled on From self-portraits to street art: 1,000 museums at your fingertips