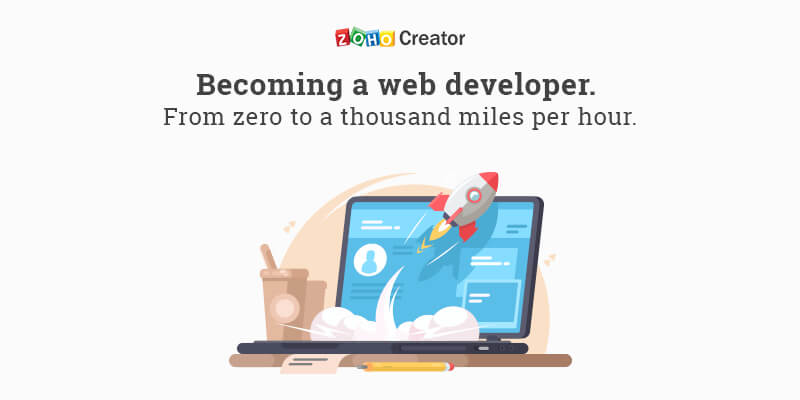 “I imagined the web as an open platform that would allow everyone, everywhere to share information, access opportunities, and collaborate across geographic and cultural boundaries.”

That’s what Sir Berner-Lee told The Guardian, when they asked him how, as the founder of the World Wide Web Consortium, he envisioned the web. It’s been 28 years since Lee submitted his first proposal for the web.

The web intrigues me, both because you can connect virtually with people thousands of miles away, and because of the number of opportunities it has opened up for people who work in various development domains. My curiosity as a tech enthusiast led me on a search about how to become a web developer, and here’s what I discovered.

When the web gives you tough choices…

Front-end or back-end, that is the question.

Front-end developers design the website or any interface through which users interact with the product. These interfaces can be anything from a single web form to a complex business application.

Front-end developers need to learn and even master myriad languages (commonly referred to as markup languages), technologies, and tools. Of the lot, three have emerged as cornerstone technologies for the web: HTML (HyperText Markup Language), CSS (Cascading Style Sheets), and JS (JavaScript).
Unlike front-end, back-end development deals with handling data. These developers have a broad range of programming languages to choose from, each with its strengths and weaknesses. The most popular and commonly used web coding languages are Java, C#, Python, PHP, and Ruby. The choice of language depends on the type of website or application being developed.

And then there was security…

Contrary to popular belief, the launch of an application or a web page does not end the web developer’s work. Both front-end and back-end developers have to make sure that their webpage or application is safe from the many threats the web poses.

For example, you might have a payment gateway integrated with your application that requires the customer’s bank credentials. The developers must make sure they place validation checks to ensure the secure transmission of such sensitive information.

The web is constantly evolving, and so are the technologies that are used to build it. New technologies and tools are being built and released even as I’m writing this post. With web development, the learning never ends. There’s no denying that learning different technologies will add to your skill set, but if you think that you don’t have the time or the resources for it, there’s a solution for that—low-code technology.

Ideas are the backbone of any business. They become even more influential when they create value, not just for the people running the business, but also for their customers.

Forrester defines low-code as:
“A technology that enables rapid delivery of business applications with a minimum of hand-coding and minimal upfront investment in setup, training, and deployment.”

Low-code platforms, like Zoho Creator, can help anyone convert their ideas into full-fledged applications, without having to master a plethora of computing languages.

With the growing demand to develop and release applications faster, a low-code platform may be just what your business needs. They’re fast, highly flexible, easy to integrate across multiple platforms, and very secure. These platforms are not only intuitive, but also come with a host of easy-to-use plugins, templates, etc. that enable you, as a business owner, to create your own custom database applications.

Essentially, low-code has taken application development from a multistep, technology-intensive process to a simple three-part path: build, deploy, and manage. So what’s stopping you from being a web developer? With low-code platforms like Zoho Creator, anyone can become one.

Does your ATS pass the 3E test?
Zoho partners with LinkedIn to bring Sales Navigator to Zoho CRM

Commenting is Disabled on Becoming a web developer—from zero to a thousand miles per hour.