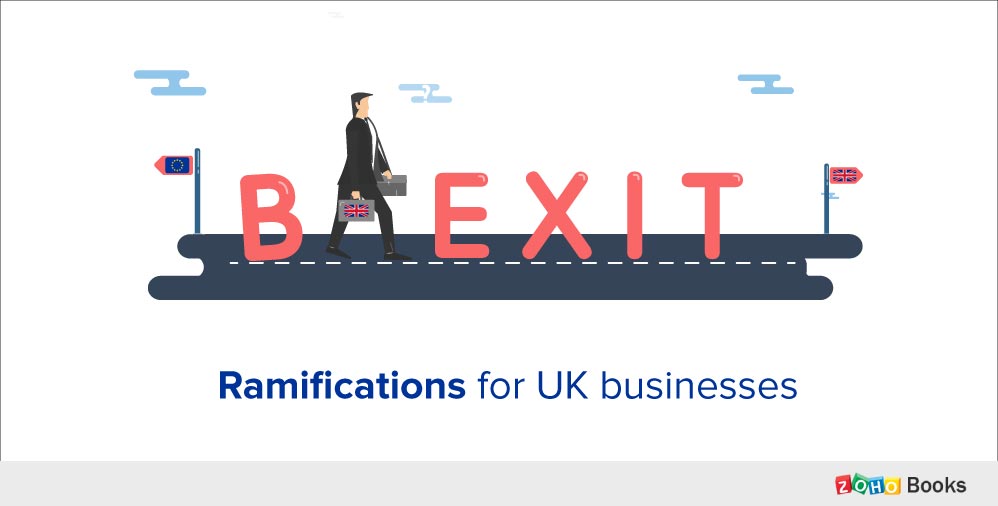 Thursday, June 23rd, saw citizens of the U.K. cast their vote for what proved to be a seismic moment in the history of world politics. The pro-leave camp won the referendum, making the U.K. the only country after Greenland to withdraw from the European Union. All pandemonium broke loose with the Great British Pound taking a serious beating, bursts of political unrest, and looming uncertainty eclipsing the business environment. As the dust settles, we give you a brief look at what the E.U. is and examine the possible ramifications of Brexit on your business.

Decoding 43 years of the U.K.’s love-hate relationship with the E.U.

After its first failed attempt to join the E.U. in 1963, the U.K. finally got inducted ten years later, along with Denmark and Ireland, as a result of the desire to be a part of Europe’s single market. It accounts for access to 500 million customers and encourages free movement of goods, services, capital, and people.

Although E.U. membership comes with many benefits, especially economics ones, the flip side of membership involves red tape, paying billions in membership fees, and bailing out faltering E.U. economies. The unchecked flow of foreign nationals has also added to the conundrum, giving pro-leave supporters enough reasons to start a pseudo-national movement.

The ripple effects on business policies

Say you are going to an amusement park. You can either pay for the individual rides you take, or you can pay the full ticket price up front. The former offers flexibility to pick and choose which rides you want to spend your money on, which is easier on your pocket, while the latter opens up the whole range of options for you, but at a higher price.

The Brexit decision essentially switches the U.K. from the latter option to the former. It cuts off access to the tariff-free single market, but it also offers the U.K. enough flexibility to form its own business-friendly policies with trading nations. The Treaty of Lisbon makes it unlikely for the UK to get a clear exit before June 2018. As with any separation settlement, before the terms are presented, the exit has already sparked a level of uncertainty, which looms over businesses.

Below are just a few of the potential changes that may occur in the business world in the aftermath of Brexit:

To quell the fear of the U.K. losing its reputation as a business hub, Finance Minister George Osborne has pledged to reduce corporation tax to less than 15% from the current rate of 20%, giving you those extra pounds necessary to invest in your business’ growth.

Value Added Tax(VAT), or tax that gets added to a product whenever value is added to it, is a major contributor to the U.K.’s revenue. Leaving the E.U. gives Britain its right to vary its VAT. Without making any sweeping changes to the current VAT system, the government plans to add more goods and services to the existing list. This addition to the VAT will increase your tax burden, which will then be passed on to your customers.

The labour policies could prove to be a sticky wicket for the government. Brexit brings an end to the free flow of labourers between the EU countries. While this would trigger homecoming for many U.K. expats, you stand to lose out on the services of talented employees who happen to be from an E.U. member state. The government will be wary of this situation, and an immigration model in line with Australia’s (points system) or the U.S.’s (skills and expertise-based) could be adopted in the future.

Additionally, the government would like to impart a greater discretion to the employers. Changes in the maximum 48-hour working week rule and agency(temporary) workers rights could be seen as a step in this direction.

London has been the epicenter for all financial activities for the E.U. Major American and European banks have been able to operate throughout the E.U. through Passporting because they have subsidiaries in the U.K. Brexit will force Brussels to come up with a new financial nerve center for the E.U. region and will cause Britain to lose a chunk of its trade with the E.U., making it a less lucrative destination for foreign banks. The bank exodus will not only move financial service jobs out of the U.K. but will also reduce the available funding for local businesses.

5. Increased costs on administration and compliance:

The U.K. has always been a strong advocate of an anti-tax evasion policy. The existing laws permit multinational companies to exploit the loopholes in the tax system to shift the profits legally to low or no– tax jurisdictions. The authorities would like to tighten the noose around companies carrying out business beyond U.K. borders.

A serrated policy is imminent after the Brexit. Changes in the currents laws would increase the administrative and compliance costs for your business.

Will you lose out on 500 million customer base?

Brexit does not necessarily signal a total loss of access to European customers. Restricting local businesses from access to the single market would be the last thing on the U.K. government’s agenda. Instead, the U.K. may take up any of the alternative partnerships: it could follow Norway by becoming a member of the European Economic Area and European Free Trade Association, it could join Switzerland in accessing the E.U. by way of bilateral agreements, or it could replicate Turkey’s Customs Union with the E.U.

Although these arrangements provide alternate options for U.K. trade with European countries, they lack the ability to offer financial service.

At present, the economic costs to the U.K. appear to exceed the benefits. In the long run, the uncertainty in the U.K. will dissipate through stable agreements with the E.U. and other major market players like the U.S., China, and India. Businesses, for now, can breathe easy until the new policies are chalked out, which would not happen anytime before June 2018.

A or B? Let’s test.
The first tool to track revenue from your social media marketing efforts

No Replies on Brexit: How will it affect U.K. businesses?

Commenting is Disabled on Brexit: How will it affect U.K. businesses?